Low angle alternative for a tripod: a ground pod

In many occasions a tripod is too big and clumsy. A good alternative would be a ground pod, but where can I get one or do I make one myself? Commercial ground pods cost around 100 dollars.

I’ve built a few different ones over the years but for this coming spring I wanted to make a sledge type of a model. Would it work better and be used more than the plate one I built a year ago? So many good projects are left in the basement shelves and not used so much even though they would be the better option.

In this blog I will introduce two different type of ground pods and list their strengths and weaknesses. The most important feature is the ability to move smoothly on the ground and that it is stable.

Pan or plate model, the most common type

As you google ground pod and look at the image search, you will see mostly these types of ground pods. They are usually a frying pan looking device that has a screw in the middle to attach a ball head to.

This model is very simple and quite cheap to build. It doesn’t require as many tools as the sledge one. The basic idea is to get a hold of a frying pan or other durable plate shaped thing, make a hole in the middle and put a right kind of bolt through for attaching your ball head.

The flat bottom of this kind of a ground pod comes with some challenges in the building phase and also in use.

When building it , you have to make sure the bolt is attached in a way that in keeps the bottom flat. There are a few options on how to do it. One is to mount the bolt to a piece of wood and attach the piece to the inside of the pan by smaller screws.

One option would be to hammer a small dent inward so the bolt won’t touch the ground.

But the again only few type of terrains are so flat and hard that a slightly uneven bottom would be a problem. For example when used in sand, it won’t be a problem at all.

My own version is made out of a Trangia aluminum plate that I found from a sale. This type of a plate is very light weight which makes it quite unsteady. It is also too small in diameter for 400 2.8 II L IS + small camera body.

When choosing the pan model it’s best to go for a little wider and heavier plate. They work well on a surface that is flat, for instance snow or sand. But they are not the best option in forest ground or swamp where you will need a steadier option.

I’ve been thinking about a new and improved ground pod for a while now. This week during a work meeting I drew a sketch of one and later that evening I was at a hardware store.

The ledge is made of two aluminum pipes and some kind construction plates. Plus a good amount of nuts and bolts.

I made a taller version first. It was about 5,5cm taller than the one I decide on, putting the video head attachment on around 11,5cm mark. Photo below.

I decide that a lower one would be better and steadier so I removed the upright poles from it. It is super easy to modify and make taller again or even go with a super low angle and attach the camera on the 25mm skids.

The idea of the sledge is based on the two skids. The point is that it’s more stable than the pan.

They have been bent on both ends so it’s easier to push and pull around the terrain. There are two small bolts that are sanded that they don’t have any sharp edges.

First time out with the sledge

The first mount with a 1 /4 bolt wasn’t enough, the video head kept loosening up. I couldn’t tighten it in the swamp, because the adapter material was too soft and gave up. Now it has a 1/8 bolt and it should be more than enough. I would like to weld it in place so I wouldn’t need any tools to tighten it.

Brown bears on a spring snow

3.rd place in the mammal’s series in Finnish Nature Photo of the Year competition

Brown bears on a spring snow

3.rd place in the mammal’s series in Finnish Nature Photo of... 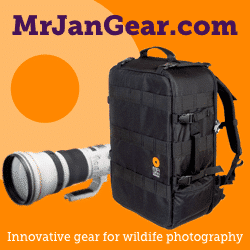